2.1.6 Energy (including Biomass and Bio-based Products)

The combustion of fossil fuels increases the level of CO2 in the atmosphere, which is directly associated with global heating. The adverse impact by greenhouse gas emissions on the environment along with declining petroleum reserves and future energy security have been realized as well. Therefore, there is renewed interest in the production and use of fuels originated from plant or organic waste for sustainable development of economy and society in an eco-friendly primary energy resource that can provide alternative transportation fuels in the short-term (Chandra et al., 2011).

Bioenergy will play an important part in the global energy composition in the next decades. Transitioning to a low-carbon energy economy while meeting increasing future energy demands will therefore require the rapid development of a large global bioenergy sector. At this level, all available sources of biomass, dedicated energy crops, harvest and process residues as well as organic waste materials, need to be exploited at a large scale (Beringer et al., 2011).

Globally traded biomass could add to energy security by reducing the dependency of oil, coal and gas imports from limited regions. Bioenergy could also create employment in struggling rural economies in the developed world and provide new income opportunities for farmers in the developing countries and thus help alleviate poverty. Private businesses have entered this developing market, anticipating large commercial potentials, scaling up their investments in biofuels and other processing technologies (WBGU, 2009; Beringer et al., 2011)

Different sources of biomass are available for energy production. Three main categories are residues from agriculture and forestry, organic waste, surplus forestry and energy crops. Dedicated energy crops are generally assumed to make up most of the total potential, although their large-scale cultivation is also one of the most controversial aspects of bioenergy. By contrast, residues and waste materials are considered to be more sustainable because they entail fewer direct impacts on land use (WBGU, 2009, Beringer et al., 2011). In addition to the agriculture and forestry residues, industrial by-products and residues are used as sources of energy e.g. in plants for heat and electricity production.

Biofuel is energy made usually from plants. Bioethanol, biodiesel, and biogas are types of biofuels. Biofuels are considered renewable energies, emit less than fossil fuels, and have received increasing attention in the transition to a low-carbon economy (DeMates, 2013).

Recent analyses of energy crops have shown that current practices to convert food-product carbohydrates or plant oils into ethanol and biodiesel have only limited, if any capabilities to curb emissions. They also compete directly with food production for the most fertile lands. High hopes rest on the development of second-generation bioenergy technologies based on the conversion of lignocellulosic plant materials from fast growing tree and grass species. These energy crops, such as poplar, willow, Miscanthus and Panicum (switchgrass) are less dependent on favorable climatic and soil conditions and require fewer inputs of agrochemicals, thus reducing their direct competition with food production. Although technologies required to process cellulosic feedstocks into electricity, heat, biofuels or biomaterials are not yet commercially competitive, they are expected to mature within the next 10–20 years (Beringer et al., 2011).

Bioethanol is the most well know biofuel and is an alcohol produced from corn, sorghum, potatoes, wheat, sugar cane, even cornstalks and vegetable waste. Bioethanol is alcohol that is produced during the fermentation of sugars. As in brewing, yeasts covert the sugars into alcohol, which is then distilled and purified before it is ready to use in the petrol tank (DeMates, 2013; Kotrbo, 2016). It is commonly blended with gasoline. However, plants grown specifically for any type of biofuel are not ideal due to the energy required, environmental impacts, and emissions associated with harvest and transport. Ethanol is a complicated issue, but overall is helping ease demand on fossil fuels (DeMates, 2013).

Biodiesel is oil from plants or animals used as an alternative to or blended with petroleum diesel in automobiles and industrial fleets with diesel engines.Grease or oil from cooking can also be converted to biodiesel and is more sustainable because it is a by-product of another process (DeMates, 2013).Biodiesel is similar to fossil diesel. It is made by purifying and esterizing the oil. This involves removing glycerine to make the oil less viscous. Pure vegetable oil is so thick that it can only be used in specially adapted diesel engines (Kotrbo, 2016).

Diesel engines can automatically run off blends with 20% or less biodiesel. Using more than 20% biodiesel or vegetable oil from cooking requires some infrastructure adjustments. Local and regional recycling centers have also been working to make biodiesel more accessible, but challenges in scalability hold biodiesel back as well as concerns over food prices if using raw material. Alternative fuel vehicles such as hybrids and electric cars can alsopartly displace demand for biodiesel (DeMates, 2013), but not in trucks because of the high energy need.

Biogas is created as a by-product of decomposing plant and animal waste in environments with low levels of oxygen. Biogas is made by fermenting organic material in an airtight container. Anaerobic bacteria break down the material, releasing methane (CH4) and CO2. Methane is the principal gas in biogas.  Methane is also the main component in natural gas, a fossil fuel. Biogas can be used to replace natural gas in many applications including: cooking, heating, steam production, electrical generation, vehicular fuel, and as a pipeline gas.  With just a few engine modifications, LPG cars can run on compressed methane (DeMates, 2013, Kotrbo, 2016).

Biohydrogen is defined as hydrogen produced biologically, most commonly by algae, bacteria and archaea. Biohydrogen is a potential biofuel obtainable from both cultivation and from waste organic materials.Dark fermentation of organic biomass, i.e. agricultural residues, agro-industrial wastes and organic municipal waste is a promising technology for producing renewable biohydrogen. In spite of its potential, this technology needs further research and development to improve the biohydrogen yield by optimizing substrate utilization, microbial community enrichment and bioreactor operational parameters such as pH, temperature and H2 partial pressure (Ghimire et al., 2015)

Bioethanol is widely produced on an industrial scale today. The available sources are plant biomass which is an abundant and which can be efficiently converted by microbes into biofuels. The pretreatment of lignocelluloses is known to be a key to the fast enzymatic hydrolysis of cellulose. In the past few years, a significant attention has been paid to the new sources of vegetable fibers, alternative to wood raw materials, for the pulp and paper applications and biocomposites (Ingale et al., 2014).

The process to make biodiesel involves a chemical reaction. This means that the biodiesel industry is a chemical industry. Those involved in making biodiesel must have a good understanding of the underlying chemistry to ensure they are making quality fuel in a safe manner. Biodiesel is an alternative fuel for diesel engines that is produced by chemically reacting a vegetable oil or animal fat with an alcohol such as methanol or ethanol. In words, the reaction is:Oil + alcohol → biodiesel + glycerin

In industrial biogas plants, industrial residues are used as a source of energy. Where possible, liquid manure from surrounding farms is delivered by trucks or pumped to the biogas plant. In order to reduce odor emissions, industrial residues are stored in closed containers or even within an enclosed hall. Depending on consistency, the substrates are pretreated, and where necessary impurities need to be removed. Powerful agitators in the mixing tank are essential for the subsequent homogenisation. If hygienisation is required, this is usually carried out at a temperature of 70° C. Subject to consistency, substrates are delivered into the digester by pump, mixed with liquid manure or process water or with a solid input device. Digesters in large plants are usually made of coated steel. Digester volumes vary, ranging from 500 m³ up to several thousand m³. The digesters are equipped with agitators for homogenisation. The biogas produced is collected in gas holders. These are usually constructed in the form of a double-membrane gas holder roof on the secondary digester and the digestate storage tanks. A large storage volume for biogas makes for greater gas consumption flexibility5.

Agricultural biogas plants operated with liquid manure, dung, crop residues or energy crops. The spectrum ranges from simple biogas plants for using liquid manure to plants that are used exclusively for the digestion of energy crops. The liquid manure is collected in a pit near the digester and from there it is loaded intermittently by pump. Due to the mostly high water content of pure liquid manure, the energy yield is relatively small in relation to the digester volume. Adding other substrates therefore significantly increases the energy yield, and thus the efficiency. In agricultural biogas plants, crop or feed residues or specifically cultivated energy crops are used as substrates (Pfeifer and Obernberger, 2007). 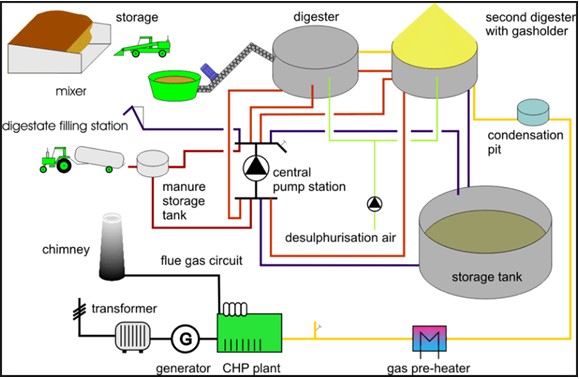 Biogas plants are usually situated in rural or peripheral regions due to availability of raw materials and odor emissions. Because the transport of gas is expensive and difficult it limits the use of biogas. It is also difficult to utilize the thermal energy generated in the process. Therefore, the business profitability of biogas production depends on the amount of aid paid on different countries.

The stages of circular economy loop

Different sources of biomass are available for energy production: residues from agriculture and forestry, organic waste and industrial by-products and residues. Biofuels such as bioethanol, biodiesel, and biogas are produced from these biomasses. The digestate e.g from biogas production contains considerable amounts of nutrients and can be used as a fertilizer on agricultural fields and parks, which closes the circular economy loop.